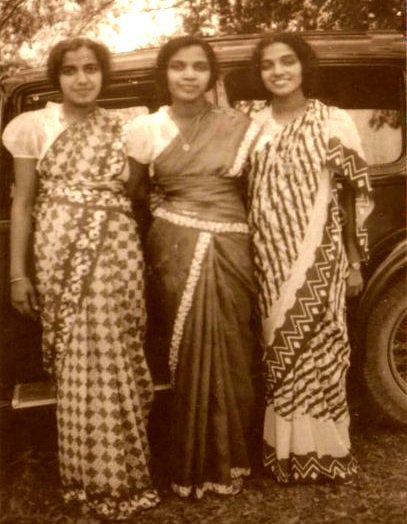 a tribute to my grandmother

My grandmother passed away on Tuesday. She would have been 96 in December. This is an essay I wrote about her when I was living with her and some other family in Sri Lanka in 2009. Growing up all over the world didn’t make for a lot of regular time with our grandmothers, so the few memories I have are extra precious to me today.

Irene Regina Samadanam Anketell was born on 11 December 1918. She is my grandmother, and I am seeing her now for the first time in eight years. I can’t even remember what she looked like then, probably some variation of old.  She is 90-and-a-half now, with a keen mind and a disintegrating though still-functioning body.

My grandmother was the baby of the family, the youngest daughter of nine siblings, born to David and Eunice Anketell of Jaffna, at the tippy tippy top of the Tamil class totempole. Ammamma (what I call her, it is Tamil for grandma) used to tell me when I was younger about the horse-drawn carriages that drove them around the town. Their ancestral home in Uduville, which is still standing after 30 years of war, was made by laborers from India.

Adored by everyone and a real knockout, my grandmother sounds like the belle of the ball character out of a southern American novel. Just today she was telling me (while we looked at the photo below) about how she used to wear her saree Colombo style, to emphasise her small waist and sumptuous figure, and that she heard a guy at her university say she had “luscious curves.” Ammamma went to to university for two years, studying English, Latin, mathematics and logic at the University of Colombo, probably sometime in the 1930s. People I have met around the world during the past years often remark about her charm, wit and vivaciousness. Apparently she had a personality that endeared her to all.

Dolly, Ruby and Irene Anketell, I’m guessing Ammamma was 21 or 22 at the time

But 90 years, being widowed at 56, five children and 11 grandchildren in four countries, and life in general takes its toll.

Today when Ammamma walks, it is a slow shuffle forward, she rocks back and forth like an unsteady reed, each step requiring leverage from the rocking motion of her fragile hips. She is a wisp of a woman now. Her body’s brittle bones look like they could snap at any minute, penetrating her sagging, translucent skin and rupturing the bulging green veins. The curves are gone, robbed by time and a mastectomy.

We were sitting on the couch yesterday and talking; the sofa looked like it would eat her small frame in its folds as she rested her neck against it, face turned upward to look at me.

What was your favourite decade of your life, Ammamma?

Decade…you know, your favourite 10 years, or just years of your life?

When grandpa saw me, and, you know…when that all happened. He thought I was so beautiful.

She was referring to how she and my grandfather met, and their famed love story. Louis Richard Jayaratnam Watson was a young doctor who needed a place to stay for a few days, and through a family connection, stayed in the house of Ammamma’s oldest sister, Daisy, and her husband. My grandmother was also there at the time, he took one look at her and fell madly in love. She was around 18 or 19 at the time. He begged her not to return and finish university (for fear that she would get snatched up by someone else) and asked her to wait for him.

She did. She quit university and waited for seven years without seeing him, without hearing from him. They were married in 1942.

He wrote me a song before he left the first time…he didn’t write the song. It was a song at the time.

Somewhere the sun is shining, she warbled faintly, So honey don’t you cry, we’ll find the silver lining, the clouds will soon roll by, each little tear and sorrow only brings you closer to me.

Her voice was without the sound of loss, her eyes shone softly, and for a few moments, she was young, beautiful and adored once more.

13 thoughts on “a tribute to my grandmother”