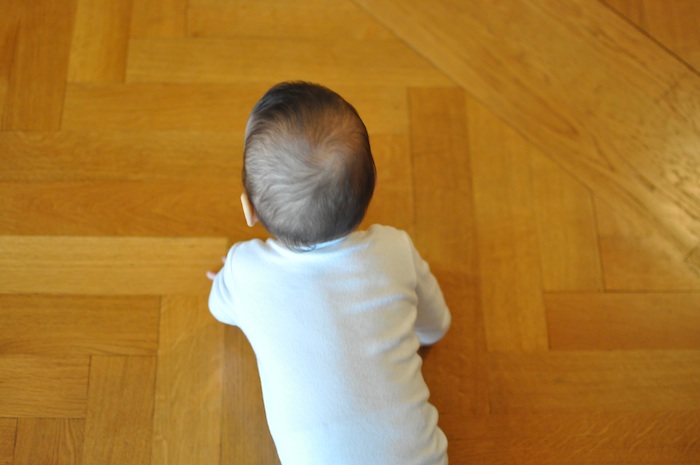 He was rarely still, my son, even as a wee newborn. His eyes flitted about the room, taking everything in before he locked in on mine when they first put him on my chest. Then his Papa started talking to him, and Small One turned his big eyes to his father’s and they locked eyes. He tossed and turned when he cried, when we put him on his back, he tried to look behind him and after three weeks would cry from frustration because he could not roll over. He wanted to move.

He has always wanted to move, my son.

We went to the park yesterday for a play date with his little friends. They were all warmly encased in wombs when they first met in a long, dry prenatal class where tired pregnant women sat on floors with no shoes holding hands with husbands who looked worn and wary on those Friday evenings.

Baby girls, baby boys, knit together inside of us now in the middle of a mass of rugs on the soft spring grass of Parc Des Bastions. They try to take toys from each other, touch each other and occasionally pull on limbs, hands and hair. There are little screeches and baby babbles; they must understand their special language. I put Small One down in the middle of the rug, and within minutes he leaves it, crawling away on the grass, headed for his open space.

He is not like this indoors. When we visit his little friend’s houses, he sticks close to me, seated and often will play with a toy, pull up on my leg or even cry. He only starts to move when he has been there for a while and feels comfortable.

I pull him back to the mat, telling him that it’s time to stay here and read a book, play with a toy, something. The grass will stain your clothes, I tell him, it’s dirty out there. I don’t remember everything I told him because it did not matter. He was gone in a few minutes. I followed him around this time, his delighted face looking at me, looking at the grass, the trees, the people. Brown dirt embeds inside his finger nails, and his sheepskin shoes are getting dirty.

He doesn’t care; he is happy here. He is himself like this, moving, moving, always moving.

I die a little – can I say that? – when I see him crawling away from me into the open. My heart, it bleeds just a bit, as I watch my baby become my son. There weren’t enough days, I think, not enough moments, no moments enough in the whole world to contain the past 10 months of life. Your life, my precious son. How precious you are to me, how impossible it is to describe what you have done to my heart.

Release, release.  I try once more to bring him back, a futile attempt and eventually, Mommy let’s go and let’s him go. He is off once more into the grass. His cute Gap pants will be ruined, I sigh to myself, and I release him into his future again.

I am going to be doing this for the rest of my life, I think, watching my son crawl, walk, run into the open space of destiny.