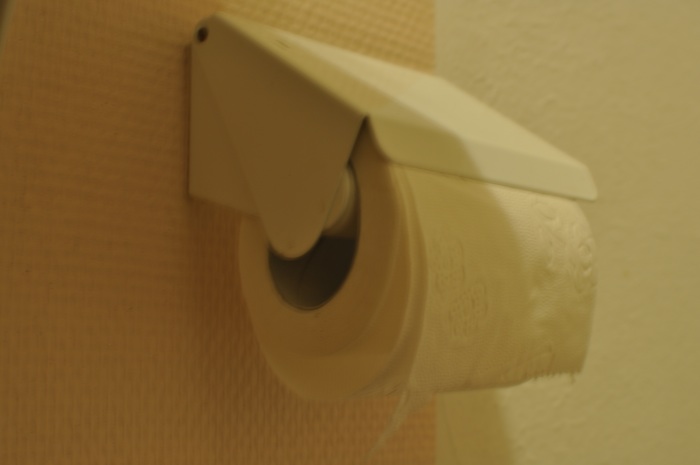 Husband and I have different bathroom habits. We side-stepped the how-to-squeeze-a-tube-of-toothpaste debacle, and for a while I thought we were superior to every other married couple for it, but in the end the toilet paper was my downfall.

I put the toilet paper where it should go: on the silver toilet holder, located to the right of the toilet slightly behind the seat, but if he started a roll, it always went on top of the washing machine directly to the left of the toilet seat. For some reason this misplaced roll began to drive me crazy.

I don’t know what the first real negative thought was, but somewhere along the way it morphed from a minor annoyance into a full-fledged source of resentment.

I assumed he was doing it on purpose (assumptions are usually fueled by accusations).

He knows I want the toilet paper on the roll. Why does he want to frustrate me on purpose by putting it on the washing machine?

I made more assumptions.

He is probably trying to play a game with me, like he wants me to put the toilet paper on the roll instead of doing it himself, he thinks his will is stronger than mine and that I will cave first. He has no idea how strong-willed I am. I will never cave.

A few times when I started a roll,  I put it on the washing machine on purpose. (Warning: Extreme Neurotic Thinking Ahead.)

That will show him! I’m above needing to follow even my own rules! I’m going to try to drive him crazy by putting him in the position of having a roll on the washing machine that I put there and now he’ll have the pressure to put it on the holder!!!! I beat him at his own game!!!

On days when I was already mad about something else, the toilet paper on the washing machine taunted me- He doesn’t care about you, he is not interested in your marriage, he doesn’t love you.

I didn’t say anything about the toilet paper for a year-and-a-half. Finally we were in Australia in January 2012, eating lunch with my sister and her fiancee and having conversations about marriage. I decided to volunteer the story about the toilet paper roll as an example of not talking about things, but I was going to do it in a “ha ha, so funny” way so that Husband would realize how much it bothered me without having to talk to him about it.

(I believe counselors refer to this as passive aggressive behavior.)

After I told the story, Husband looked at me like I was strange, and said, I put the toilet paper on the washing machine because it’s easier to reach. I thought I was making life easier for both of us.

Just to recap in case some of the details got lost:

For a year-and-a-half, I saw toilet paper on the washing machine and felt like I was having a marriage crisis, resented my husband and thought badly of him.

For-a-yar-and-a-half, Husband put toilet paper on the washing machine because he thought he was making our lives easier.

I wasted a lot of time on toilet paper.

It’s no secret that marriage is tough after kids, and there are plenty of studies out indicating that marital satisfaction plummets post first baby. Believe me, this little blog post is not going to tell you anything you don’t already know, and I certainly have no great secrets about how to make marriage work after kids (only that you have to make it work, you’re welcome).

Marriage is hard work for every married person; it doesn’t matter what you believe, what kind of life you have, where you live or what your histories are.

So here’s my lone nugget of wisdom, maybe even truth, and God only knows my life would be better if I lived by it:

If you hear an accusation about your spouse in your head or from another person, you have only two options ever: 1. resolve it immediately in your head and heart so it does not come between the two of you or 2. talk about it with your spouse.

Dismiss or talk. That’s it, no exceptions.  (And dismiss means do not think about it ever again.)

Living this out is ridiculously difficult for me partly because I am easily prone to judgment; not everyone is, your character flaws are different from mine. But the few times when I’m able to pre-empt judgment, accusations and negativity by talking to Husband about whatever has been bothering shows me that it is worth talking and having those conversations I would rather avoid.

The seemingly worst talks – and after kids, the talks are also at the worst times – lead to a richness of friendship, and a depth of love that is better than anything I could have ever hoped for. Honesty and vulnerability with your spouse is worth it.

What is something you need to discuss with your spouse? Something he or she does that eats away at you and you can’t put it aside? Isn’t it time to sit down and have the conversation? Or can you find away to put it out of your head?

This post is Day 22 of 31 Days of blogging in October. I am writing this month about my first season of motherhood, sharing stories and lessons that stayed with me from that time.