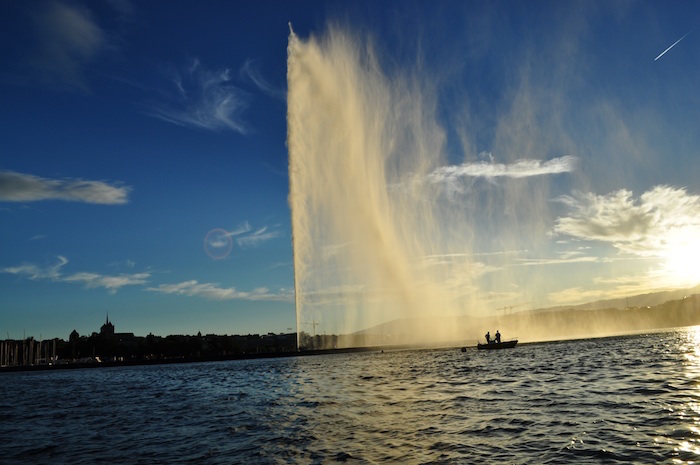 When February starts, I feel a deep settling in, a sense of, “Here we go.” They say our birthday is the day we entered the world, but I think our lifetimes mark days when we are reborn. February holds most of my beginnings.

On February 4, 2009 I boarded an EasyJet flight from London to Geneva, Switzerland. I was in the middle of my trip around the world and about to head into the one part of the trip that was totally unknown. Most people who travel do it for the sense of adventure, the longing to see new places and meet new people, being in an unknown European city would be a dream, but I still don’t know why I did it. I’m a homebody and an introvert, and I had no interest in Switzerland. If I was going somewhere in Europe, I would have gone to Italy, Greece or Spain, the places that fascinated me from my history textbooks.

My bank account was running low, and the Australian dollar was crashing, and I didn’t want to have to figure things out for myself. I wanted to be somewhere where someone else was taking care of me and telling me what to do.

So why was I in Geneva? The answer is one of those awkward “Christianese” responses, but it is the truth. God told me to go.

When I share this story, most people fixate on the God telling me part. How? They ask. That is amazing, they exclaim, How did you know for sure?

But for me the fascinating part isn’t that God told me. It is that I went. And to unwind that story, I have to take you back to Northwest Arkansas in 2003 and my friend Amber.

She has brown hair and brown eyes, and in those early university years, something was happening to her. What I remember her talking about was how God would talk to her, in prayer, through the Bible, but also just prompt her to pull over and talk to the person walking on the road and other things. She wasn’t telling me about who God had told her to marry or what she was going to do with her life. She told me about the person she stopped to encourage, the moments when she sensed she was supposed to go and do something that didn’t make sense and the conviction in her spirit of the things that she was supposed to do differently.

Maybe it was because she was a “dependable” Southern Baptist and not a “crazy” Pentecostal that I trusted what was happening in her life, maybe it was because I knew her and loved her and could see first hand the transformation. Listening led to obedience, hearing led to action, and I witnessed a slow deepening of love in her heart for the things of God, it unlatched freedom in her life, and I watched, captivated by the life of adventure unfolding in her life.

I knew I wanted what she had.

After Christmas break in the drive back to my townhouse room, I decided 2003 was the year I was going to start listening to God. I didn’t set an alarm and depended on the Holy Spirit to wake me up for class (he didn’t, I started setting an alarm again). I could tell you lots of crazy stories, clothing I threw out, music I deleted from my computer, and the many other zealous signs of youthful passion. I could tell you about reading Isaiah 61 and memorising those words, Beauty for ashes, a garment of praise instead of a spirit of despair, oak of righteousness a planting of God, and holding on to those promises to get me out of a period of depression.

Maybe you smiled, maybe you rolled your eyes, but I can tell you that 2003 is the year when God became my friend, it was the year the words in my Bible started to live inside of me. There was a trust unfolding in my soul as we talked through each day, the knowledge that God would never leave and that I could expect his hand to be faithful.

It is difficult to obey someone you don’t trust, but the more I listened, the stronger his voice grew, the more familiar it sounded. It called me home, slowly redefining my identity, shaping my beliefs, creating a space in my life that was both terrifying and tender, sacred and funny. And slowly obedience became easier.

So much easier that when it made no sense at all to fly to a small town in Switzerland, I did it.

I often wonder what I would say about Geneva if I never met the man who became my husband five days into that two-week February visit.

I think I would say that learning to listen to God and do what he says has been one of the sweetest, most frightening experiences of my life; that you cannot predict how it will go; that obedience is both painful and lovely; that you will wonder if you hear right and you will question yourself; that there is grace abundant for each moment and each day.

For the girl wandering around Lake Geneva in a coat that wasn’t warm enough and for you today, I would say, You can trust him, and it is worth it. You will never regret saying yes to God.

I’m linking up with Amy Peterson today with this story. Amy wrote a beautiful book, Dangerous Territory. I read this memoir in a few days, the writing is solid and meaningful, the story is compelling. For anyone who works overseas in a ministry context, this book will give you language for the many stressors and complexities of missionary work. For anyone in a western country, this book will give you words for your own desire for a meaningful life and the broken ways we can create that for ourselves. I highly recommend it.

5 thoughts on “trust and obey”